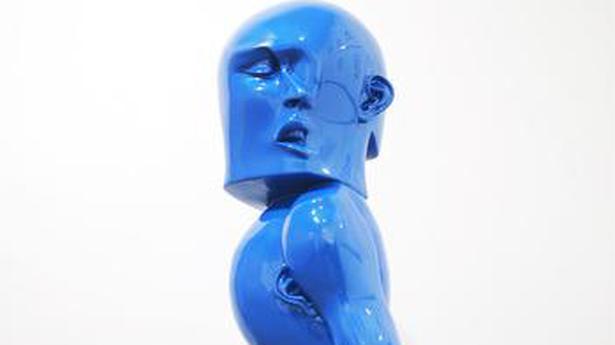 Adani Group CFO Jugeshinder Singh To NDTV, We Know The Investors, But KYC Is Not For Us To Handle

After a fashion label with his twin brother, designer Anamika Khanna’s son, Viraj, debuts as an artist

A blue figure kneels with its head turned almost fully backwards… as I look closely, I realise that what I’d assumed was the torso is actually the head of another figure. It is not a single sculpture but an amalgamation of limbs and heads. In another work, the protagonist is a short figure of indeterminable gender with really large lips. Dressed in a tweed jacket, with a set of space-like goggles and a superhero-style bandana, its hands are wrapped around its head in a manner that is almost gymnastic.

These humorous, almost caricature-like, ‘characters’ belong to the body of work debuted by emerging artist-designer Viraj Khanna, whose solo exhibition, What My Mother Didn’t Teach Me, opens today at the Loft Quest Mall Kolkata — hosted by Art Exposure and curatorially advised by Ina Puri.

“I like working with the human condition,” says Viraj, 25, when we get on the phone for an interview. “We are always trying to be perfect when, in fact, we aren’t. In my work, I strive to show the many faces that we have. That is why I like to employ humour and wit to essay this,” adds the young artist, who is the son of fashion designer, Anamika Khanna.

Moving out of the shadow

I wonder at the title of the show, What My Mother Didn’t Teach Me. Implicit is the act of self-discovery, which has outgrown ties to the maternal figure.

The Khanna twins grew up surrounded by art, especially textiles and embroidery, which Viraj says helped him develop a certain aesthetic. However, his foray into art-making has been his own. “My mother is a larger-than-life character for both me and my twin brother, Vishesh. Her name is so well-known and she is such a powerful figure who overshadows everything that we do. It is a good thing, but sometimes you also want something that is your own,” he says. Like the twins’ fashion label, AK OK. The duo launched their prêt line in 2019 — starting with traditional silhouettes such as lehengas before moving to more post-pandemic friendly athleisure — to good reviews. “But art is something I did on my own. My mother didn’t teach me that. Which is why I decided to name my solo this,” he says, with laughter in his voice. What does mama think about the name? “She actually loves it! She encourages me in everything I do.”

Besides the fiberglass sculptures, his artworks also include a selection of collage work with paper and cloth. “Embroidery and textiles involve putting together different materials, fabrics and other elements to express certain feelings or perceptions. Transmuting this into my collage work and paintings has been liberating [as I was able to explore similar philosophies but in a totally different architecture],” he says.

Viraj, who hasn’t formally studied art, believes creativity is not inborn; rather, it is something you can work on and get better at the more you try it. “So I have never been intimidated about working with new materials and spaces,” he says, adding that while he doesn’t know what his next step as an artist would be, he is “open to opportunities”.

The exhibition is on physical display to the public from March 14-22, and will continue online at artexposure.in.

Colin Farrell, Rachel Weisz to star together in ‘Love Child’

New on Amazon Prime this week: ‘Sherni,’ ‘The Little Things’ and more

Adani Group CFO Jugeshinder Singh To NDTV, We Know The Investors, But KYC Is Not For Us To Handle