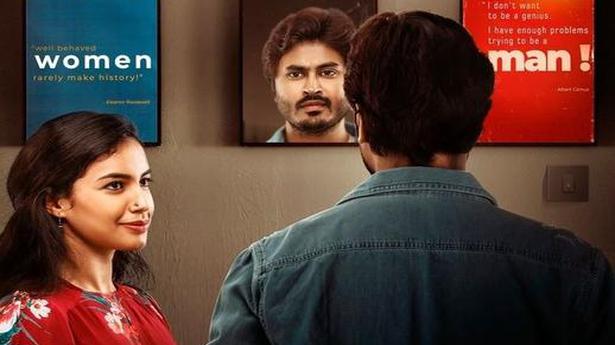 You can read books and watch movies about modern relationships and still feel that they haven’t addressed everything there is to address. For, each couple’s journey is unique. There’s a point where the female protagonist Rheya (Sanchita Poonacha) realises this and tells her friend that she’s in no place to dole out advice because, until such a scenario happens in her own life, she wouldn’t really know.

Jayanth Gali who has written and directed this film wants us to forget all the societal norms and take a new look at relationships. He isn’t dwelling on live-in relationships. That idea has been done and dusted in cinema, across languages. But what if a relationship cannot be labelled?

Love, Life & Pakodi unravels in Bengaluru and the characters often converse in English. Not that it’s a problem, since the film has been released solely in multiplexes and knows the audience it’s catering to.

The narrative shatters time-tested patterns of on-screen courtship from the word go. Arun (Karthik Bimal Rebba) first spots Rheya on the stairs with her boyfriend. Days later they know they have common friends. She enters his house at the least expected moment — when she’s going through an abortion and needs a place to rest.

Arun doesn’t judge or question her, neither does the writer. The issue is never brought up again in the course of the story. There’s neither any character assassination nor does she feel the need to justify. The familiarity between Arun and Rheya stems from a mutual non-judgemental space.

For a long time, nothing much happens in their lives and the film. Jayanth takes his time to show how their bond grows. She begins to transform his house, making it and his life more beautiful. Even when they begin to have sex, they don’t talk about living in. Marriage is certainly not on their minds.

But we know which direction the story would ultimately go. When Arun broaches the idea of a long-term commitment, she develops cold feet. Jayanth brings in other factors that play a part in their lives and raises a bunch of questions. Do children of broken homes tend to be more confused and scared of marriage? If they want life to continue as is, without strings attached, would they be equally non-judgemental about changes in their parents’ lives?

It’s the last question that both Rheya and Arun are forced to introspect. When the respective single parents are brought into the story, it’s not tough to guess what might be the twist in the tale.

What’s refreshing is how the parents don’t preach but give Rheya and Arun enough time and space to decide what they want, or don’t want, in life.

The ‘pakodi’ in the title can stand for ‘when life gives you lemons…’. Make what you will of the lemons and turn the course of your life.

Love, Life & Pakodi is a talk-heavy film and after a point, the overdose of musings on life over drinks and smoke gets tiresome.

Pavan’s music helps to keep things together when the middle portions feel like a stretch. Sanchita Poonacha is a promising talent. Whether she needs to be clumsy, adorable or plain annoying, she makes it look effortless. Karthik is fine as Arun and gradually comes into his own as the film progresses.

Love, Life & Pakodi may not have the finesse of big budget romances and requires some patience to watch. But it surely knows to find newer things to discuss in the boy-meets-girl trope.