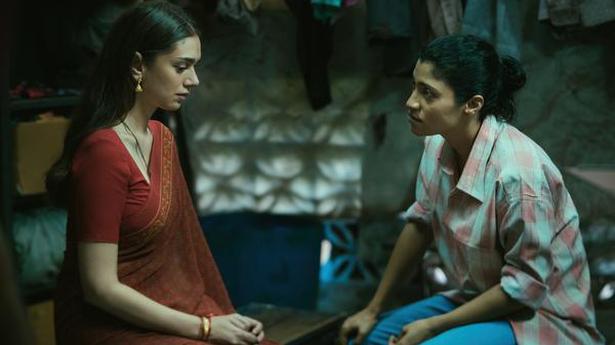 In the past year, several anthologies, such as Unpaused and Paava Kadhaigal, have made it to OTT platforms, following the tried-and-tested formula of four short films under one umbrella loosely tied together by a common theme. In the latest anthology, Ajeeb Daastaans, four stories are built around fractured relationships — and unusual ways of navigating them.

In Shashank Khaitan’s Majnu, Jaideep Alhawat and Fatima Sana Shaikh find themselves in a knotty love triangle at a brooding haveli. In Neeraj Ghaywan’s Geeli Pucchi (Sloppy Kisses), the strongest film in the anthology, two women (Konkona Sensharma and Aditi Rao Hydari) who work in a factory are drawn to each other as they grapple with their widely diverse identities.

In Raj Mehta’s dark drama Khilauna (Toy), actors Nushrratt Bharuccha, Abhishek Banerjee and child actor Inayat Verma stumble through toxic alleys of elite apathy as their days living in a shanty take a bizarre turn. In Kayoze Irani’s quietly poetic Ankahi, Shefali Shah and Manav Kaul strike a special connection that unfolds in unexpected ways. The films travel a full arc, with biting twists in the tales. Some are subtle, others startling.

Produced by Karan Johar’s Dharmatic Entertainment, the contrasting stories are located in a variety of lived-in spaces as the characters work through strands of dysfunctional love, jealousy, prejudice, oppression, loneliness, and revenge.

Where did the ideas come from? For Ghaywan, the film was a track that was on his mind when he was writing his first film, Masaan, many years ago. “But it was too ajeeb [strange] for Masaan, so I thought here is an opportunity for me to make something different and I jumped at it,” says the director over a Zoom interview. Hydari, who appreciated the sensitivity of Ghaywan’s first film, adds, “Saying yes to the film was a no-brainer. It was a world and a working style that was very different and I wanted to experience a film like this.” The film, says Ghaywan, gave him the chance to talk about the largely unexplored intersection of caste, class, gender, and sexuality in India. “For example, Koko [Konkona] and Aditi’s characters come from different backgrounds, yet their experience of patriarchy is the same,” he says.

One of the ajeeb elements he wove into the film was playing with the classic idea of a manic pixie dream girl through Hydari’s character. “I feel it’s such a male gaze and is so prevalent and I wanted to subvert it,” he says. Prep involved several discussions on the history of politics and caste to let it seep into the actors. Sensharma was spotted on set reading Yashica Dutt’s Coming Out as a Dalit, but Ghaywan also relied heavily on the raw energy of the actors, both of whom he said have a different process. “Koko wants to understand every bit of it and Aditi’s process is more being in the moment.”

In Khilauna, which also explores the dynamics of class divide, the title runs as a telling metaphor through the story. What attracted Raj Mehta of Good Newwz to the film is that it could be interpreted in many ways. “Sumit [Saxena], the writer, built the story around a real incident. It’s about different kinds of people trying to survive…. They have common traits and that blurs the differences between them,” he says, adding that it was a tricky subject to navigate, especially with a child at the centre. His lead actor, Bharuccha, was taken in by the ending. “I did not see it coming. It’s a very bold, brave move and we did it without toning it down,” she says. Prepping for her role of a domestic worker meant she had to shoot herself mopping the floor at home and send it to Mehta to prove she could do it. “I like doing a role I haven’t done before. It was different and challenging. The method to my madness is just to have fun with it,” says the Pyaar Ka Punchnama actor.

Coming off the back of a tremendous amount of global content released on OTT platforms during the pandemic, Ajeeb Daastaans caters to an audience whose tastes have shifted. Mehta believes it’s time to raise the bar. “Writers are going to change the game and directors have to take it forward. The audience has definitely evolved and you can’t just give them the old dated stuff,” he says. Bharuccha adds that “it’s a great time to be an actor”, with a lot more possibilities and experimentation in the works. The pandemic has also shifted sensibilities.“The way I look at the world has changed a bit. My sensitivity towards urban apathy, one of my favourite subjects that I keep exploring, has changed. I got to see it first hand,” says Ghaywan.

Has it then become easier to tell stories that push the boundaries of Hindi cinema? “That Karan Johar and Netflix have come together to make a film like this is a healthy sign of changing times and how there is freedom to make these kinds of films,” says Ghaywan. The anthology, he says, shows that “there is no black or white. There are shades of everything in our lives”.