A documentary traces the journey of Assembly Rooms, the oldest cinema hall of Udhagamandalam 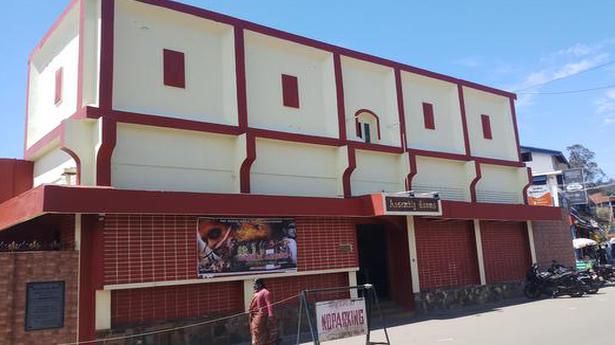 A documentary throws light on the continuing legacy of Assembly Rooms, the oldest cinema hall in Udhagamandalam that occupies a pride of place in The Nilgiris

Recently, the Assembly Rooms theatre, the oldest cinema hall in Udhagamandalam, screened the classic Mughal-e-Azam to the Governor of Tamil Nadu, Banwarilal Purohit, and his entourage. “It was an honour to host the screening,” says D Radhakrishnan, the honorary secretary, of hosting the Governor, in a docu-feature chronicling the theatre’s journey. Made by Mayanz Theatre, the 25-minute film highlights Assembly Room’s beginnings as a ballroom built for British soldiers in 1886.

“It used to be called Misquith’s Rooms. In 1922, Lady Willingdon (wife of Lord Willingdon who served as the Viceroy of India from 1931-36) bought it for ₹50,000, and donated it to the people of Ooty for promoting art, entertainment and culture. Not many know that [actor and] theatre artiste Vivien Leigh has performed here. From day one, the ground rules were set that no politics should come in the way of running the institution. That holds good even today,” explains Radhakrishnan, a retired journalist of The Hindu and whose association with the theatre goes a long way.

Interestingly, Assembly Rooms is the only cinema hall in the country to have a State’s Governor as its patron and a District Collector as its president. Radhakrishnan became its honorary secretary in 1984. “It’s a way of life from my childhood days. My family lived near the Ooty Botanical Garden which is a stone’s throw away from the Assembly Hall. Tickets were priced at a meagre 42 paise then. Catching a movie became a routine,” he says and recalls watching movies like Sound of Music, Ben-Hur, 10 Commandments, Battle of the Bulge, Clint Eastwood’s A Fistful of Dollars, Alfred Hitchcock’s Psycho and the hugely popular Cleopatra featuring Elizabeth Taylor at the theatre.

The Assembly Rooms became a trust in 1923 and began screening English movies in 1924, a practice that continues to this day. In 1974, the theatre underwent a major structural change. A facade came up and the wooden flooring that served as dance floor was removed, and modern seats were installed.

“Now we show other languages too. I remember once when we screened Kamal Hassan’s movie Salangai Oli, some of the audience members sought permission to whistle during two scenes. Discipline is foremost while watching a movie here. There are people who wouldn’t come for a show if their regular seats were not there.”

In the documentary, Radhakrishnan also talks about the museum within the theatre’s premises and which has an enviable collection, including a vintage 1954 Bauer movie projector that is in working condition, old film rolls, cinemascope lens, and phonograph records. The centenary celebrations was held in 1986, spearheaded by Radhakrishnan, and is another milestone since they tied up with NFDC and held a film festival that screened English films, both classics and contemporary ones. Later, a short film festival brought film makers like Mysskin, Bharathiraaja and Leena Manimekalai.

Assembly Rooms has also hosted Amitabh Bachchan once. In the early ‘90s, Bachchan watched the rushes of his film Hum whilst filming for it in Udhagamandalam, recalls Radhakrishnan. “Bachchan and Kimi Katkar were watching the shot that featured Rajinikanth (who also acted in the movie) running down a slope. They commented on his performance, and how it can be bettered in a healthy way. Film maker LV Prasad and Smita Patil have been here too,” he adds.

The theatre stands on 1.15 acre of prime real estate. It was shut in 2011, and was reopened in November 2015 following its renovation; 340 push back seats, digital and 3D technology were introduced to give the audience a better viewing experience. Recently, the 600-ft dilapidated compound wall up got a makeover with seven LED display boards that feature scenes from timeless classics like Sean Connery’s Goldfinger, Mackenna’s Gold, Bruce Lee’s Enter the Dragon to name a few The tradition of printing a programme list of movies three-months in advance had to be discontinued in 2015. “For people from Coimbatore, a weekend trip to Ooty is incomplete without a visit to a popular Chinese restaurant for lunch, a date with hairstylist Varadhan who ran Nilgiri hair dressing salon, and an 8.30 pm show at Assembly Rooms.”Though the lowest ticket prices remained at ₹4 — and the maximum at ₹30 — for a long time, the prices have now been revised. A second class ticket costs ₹60, first class costs ₹80 while the box seat costs ₹100.“As a public institution, Assembly Rooms is still vulnerable. It is a landmark that is truly owned and safeguarded by the people of Udhagamandalam. It is a part of their life,” Radhakrishnan concludes.

Colin Farrell, Rachel Weisz to star together in ‘Love Child’

New on Amazon Prime this week: ‘Sherni,’ ‘The Little Things’ and more